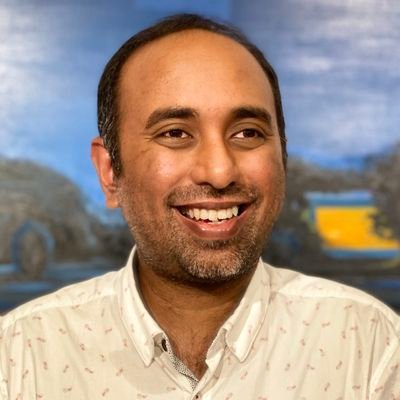 Nabeel Ismeer
Renewable Energy Professional
The IPCC warns us about human caused climate change, the biggest cause being our emissions from burning fossil fuels since the Industrial Age.

This interview was conducted by Rebecca Herbert

Why did you write The Hunter's Walk, about race and climate change?

Race and colorism has unfortunately been a part of the human experience. As a former Sri Lankan, I watched how fervent nationalism pit Sinhalese vs Tamils. When that conflict was over (at least militarily), that nationalism turned on Muslims, and I saw my childhood Mosque burn to the ground.
From a climate perspective I first became aware of the destructive power of climate change when the Syrian Arab Spring started. Part of the demonstrations were over bread, due to a shortage of wheat from drought ridden Russia. There was a study that linked the drought to climate change.
Apart from these events, I have always been interested in origin stories, and a question I had was how our skin colors evolved in the first place. The current science proposes our skin melanin quantity evolved as we migrated to higher latitudes, balancing our folic acid and vitamin D needs.
What if our different skinned ancestors met at that time? Could prehistoric colorism have existed? Could Ice Age climate change have shaped an early interaction? The story developed organically from those questions.

How does climate change feature in the Hunter's Walk?

One of the interesting things about the Ice Age was it was not all ice expansion all the way. For example in Mongolia ice sheets actually receded during the last glacial. There is also evidence of long periods of warming temperature in Greenland. In the Hunter's Walk the tribespeople go through generations of drought, and are then suddenly hit with snow, which no one in the region had ever experienced. This creates fears of scarcity and divine damnation, like we would have, but it also requires a step change in technology and social constructs to survive.

Why does fiction matter in a world of real-life consequence like climate change, and racism?

In many ways fiction is a possible truth, especially those stories that are deeply rooted in human existence. It gives us the chance to explore topics like climate change without actually experiencing it. Whether 1984 or The Handmaid's Tale, these stories take us into another world and let us live the hardships and joys of these characters.

Is there any positive takeaway for readers from the Hunter's Walk?

The protagonist and his close friends try to cope with scarcity by bringing "outside ways" like sewing, or think up new constructs like trading, and even an early form of democracy. They try to answer tribalism with inclusivity and invention.

The positive takeaway is by being open to different ideas, abilities, and personalities we might find a way through the storm.

How is climate change in the book different from what we are facing through the emissions of CO2?

The IPCC warns us about human caused climate change, the biggest cause being our emissions from burning fossil fuels since the Industrial Age.

The climate change in The Hunter's Walk is not caused by man. Usually, these changes occur over hundreds of thousands of years, although sometimes temporary changes are accelerated by an event such as a massive volcanic eruption.

The difference is the man-made component, and how we are accelerating temperature increases that usually take thousands of years. Bushfires, intensifying storm seasons, heatwaves, are having critical effects on our coral reefs, our forests and us humans at rates we cannot adapt.

Sadly, we will have to adapt because in the short term we will see climate change effects. In Singapore billions of dollars are being spent on flooding infrastructure, in the United States flood walls are being planned around Manhattan, and in Maldives the government for a while was seriously considering relocating the entire country.

But we must remember that we are the main driver of this change. If we can act over the next couple of decades and keep warming down to 1.5 degrees, we have a chance to reduce impacts, halving species loss, halving the populations exposed to extreme heat, and halving the reduction in maize harvests in the tropics.

Tired Earth: An Interview with Susan Bonfield, Executive Director of the Environment for the Americas

Tired Earth: An Interview with Henry McGhie, Co-Founder of Museums for Climate Action

Tired Earth: Interview with Judith Enck, founder and President of Beyond Plastics.