George Scott
Editor- environmental activist
Huntington Beach, California has been undergoing a clean-up operation after a major oil spill. The effects will be long-lasting. Oil can kill surface-dwelling animals and birds by poisoning or suffocation, as well as affecting buoyancy and natural waterproofing.

Contaminated food supplies mean animals may become malnourished or poisoned over time.
Research on previous oil spills shows that toxic chemicals remain in the ocean for years, often sinking down to the seafloor and poisoning the sediment.

This article is brought to you thanks to the collaboration of The European Sting with the World Economic Forum.

For many, Huntington Beach, California is better known as Surf City. But in early October, there wasn’t a wetsuit in sight, as miles of beaches were closed by a major oil slick just off the coast.

An oil pipeline leak left toxic crude oil along beaches and contaminated critical marsh and wetland habitats. Dead fish and birds washed up on the sand, with the local mayor calling the slick an “environmental catastrophe”.

The California Department of Justice is investigating the spill, which, in the worst-case scenario, is estimated to have been more than 131,000 gallons, according to CNN.

Beaches reopened on 11 October, only after the clean-up operation could produce tests showing “non-detectable amounts of oil-associated toxins” in the ocean water.

It is too early to tell the full extent of the oil spill’s impact, although the Oiled Wildlife Care Network have already reported 45 dead birds and nine dead fish.

Environmental experts are warning that the damage will be long-term, and in some cases possibly irreparable.

So, why are oil spills so bad for the environment?

-Please avoid swimming, surfing, or exercising on beach today.
-It’s not safe to fish off the piers, bridges or jetties. Please avoid.
-protect your animals from oil pic.twitter.com/Cbkyv1BGo8

In the immediate aftermath of an oil disaster, the effects on fish, sea birds, and other marine animals are often very visible. Coated in oil, animals can be killed by poisoning or suffocation.

Those living close to or on the surface, like sea birds and otters, or those who come to the surface to breathe or feed, like whales, dolphins and turtles, can be among those most affected.

Oil-drenched feathers and fur can adversely affect animals’ ability to regulate their body temperatures. It can also affect natural buoyancy, causing animals to drown. And because birds like to preen themselves, they are highly likely to ingest the oil, potentially causing damage to their gastrointestinal tract, as well as organ damage.

Fumes from more volatile petroleum products like kerosene or jet fuel can be harmful to lungs when inhaled, while also causing burns, eye irritation and neurological issues.

Oil can also affect food sources for sealife, making it less available or of poorer quality, so even animals that survive the initial environmental hazards may still suffer in the weeks and months following the leak. 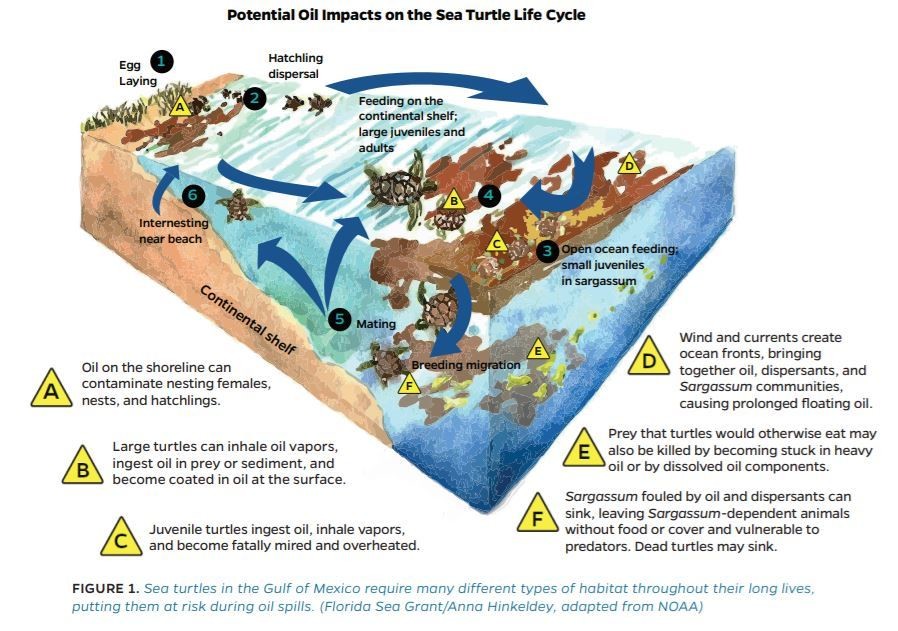 Oil can affect marine animals throughout their lifecycle. Image: Mississippi-Alabama Sea Grant Consortium
The recovery from the Huntington spill is likely to be uneven, fisheries biologist and marine ecologist Steve Murawski told the Guardian.

Alongside birds and marine mammals which will be harmed – especially those that live along southern California’s offshore islands or coastal wetlands – populations of smaller creatures like plankton are also likely to be hit.

Because of their fast lifecycle, plankton are likely to bounce back quicker than “the longer alive and the slower growing things, like abalone and other things that can’t get out of the way”.

In 2010, the Deepwater Horizon slick in the Gulf of Mexico became the largest ever marine oil spill in US history, with more than 134 million gallons of oil spilling into the ocean. More than a decade on, scientists have shown the impact is far longer lasting than many expected. 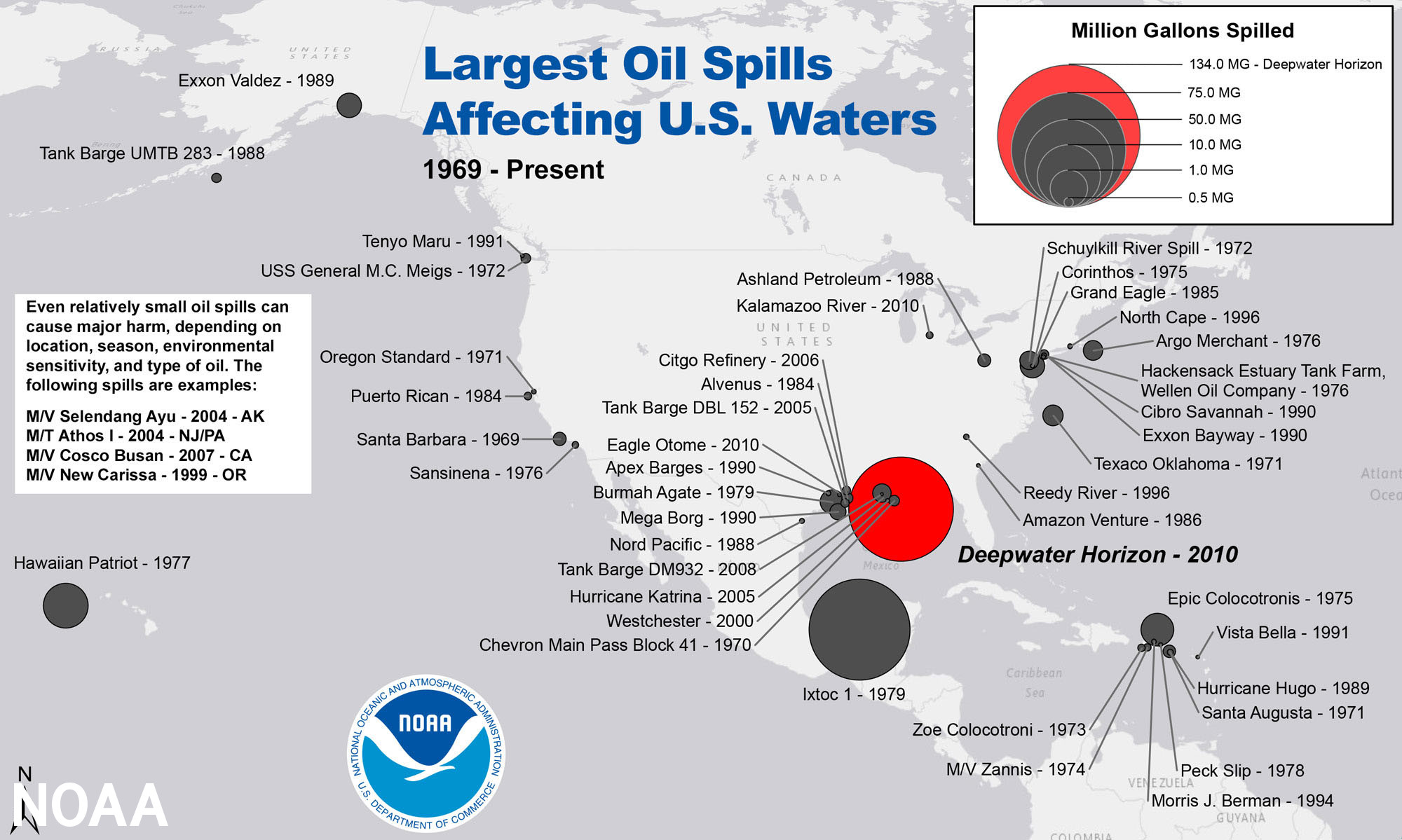 The Deepwater Horizon disaster was the biggest oil spill to affect US waters Image: National Oceanic and Atmospheric Administration
In the summer after the slick, oil levels along the miles of affected coastline were found to be 100 times higher than background levels. But eight years on, levels in the sediments in the surrounding marshland were still 10 times higher than prior to the accident.

Research shows that droplets continued to sink to the seabed even a year after the spill ended. It affected sedimentation rates – a crucial food source and habitat for some animals. For many deep sea creatures, living among the sediment surface, recovery could take decades.

A study on bottlenose dolphins exposed during the Deepwater Horizon event has shown that the oil may have had an effect on their immune system that spanned generations, making it harder for them to fight off infection and disease.

What’s the World Economic Forum doing about the ocean?
Our ocean covers 70% of the world’s surface and accounts for 80% of the planet’s biodiversity. We can’t have a healthy future without a healthy ocean – but it’s more vulnerable than ever because of climate change and pollution.

Tackling the grave threats to our ocean means working with leaders across sectors, from business to government to academia.

The World Economic Forum, in collaboration with the World Resources Institute, convenes the Friends of Ocean Action, a coalition of leaders working together to protect the seas. From a programme with the Indonesian government to cut plastic waste entering the sea to a global plan to track illegal fishing, the Friends are pushing for new solutions.

Friends of Ocean Action are agents of #ocean change for the benefit #people & #planet. We are excited to continue the sprint from ideas to action for a healthy, just, thriving ocean! 🌊🌊🌊 Read @FriendsofOcean Phase 1 Impact Report ➡️ https://t.co/2dbaPIfDcG #OceanAction #SDG14+ pic.twitter.com/EPjEpJwYad

Climate change is an inextricable part of the threat to our oceans, with rising temperatures and acidification disrupting fragile ecosystems. The Forum runs a number of initiatives to support the shift to a low-carbon economy, including hosting the Alliance of CEO Climate Leaders, who have cut emissions in their companies by 9%.

Is your organization interested in working with the World Economic Forum? Find out more here.

Restoration is a time-consuming and costly process, but ensures that ecosystems are protected.

Artificial trees or real trees: Which is better for the environment?